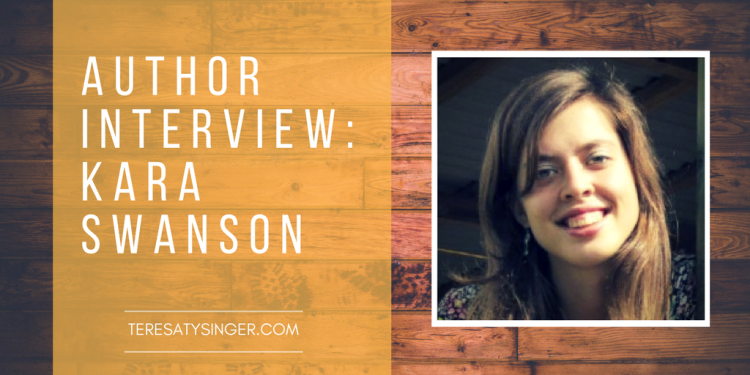 I am so excited to introduce you to a sweet author that I just met myself recently on Facebook. Kara Swanson writes Young Adult fiction, and if her writing is any bit as awesome as she is, we’re all in for a treat. Enjoy this interview with Kara, and be sure to leave her some love in the comments.

Welcome, Kara! Can you please tell us a little about yourself?
I’m 20 years old and was first published at 17, so this writing journey began at a young age for me. It’s always amazing for me to look back and see how much I’ve grown since then! But the process of putting my soul-stories to paper will always thrill me, no matter how many times I do it.

I spent sixteen years overseas in Papua New Guinea, as my parents were missionaries. I lived in the middle of the jungle, only accessible by airplane, without internet connection or cable TV. Needless to say, I read. A lot. And it has greatly shaped my own writing—I devoured novels by authors like C. S. Lewis, Wayne Thomas Batson and L. M. Montgomery. Writing my own stories seemed like the natural thing to do next, after spending hours in their worlds.

I was diagnosed with Lyme Disease about two years ago. We realize now that I’ve had it for about six years. Struggling with heavy fatigue, aches, loss of mental clarity and many other symptoms has taken college out of the running for the time being, and really stripped me of the things I’ve always held tight. Things that, looking back, had taken the place of dependence on my Savior. So, in some ways, while having Lyme has made it difficult for me to function, spiritually it’s a major blessing. When I’m weakest, He is strongest, after all. Not to mention that having a disease has given me a lot more time to write because I simply have nothing else I can do. It’s been such an honor to be able to use the stories of how He has carried me through the tempests to encourage others. Stories of how His strength is truly displayed in our weakest, most broken moments.

Wow. That is a beautiful testimony. I sure wish you healing and success on your journey. What is your favorite part of the writing process?
The writing! J I love getting to let my words carry me away to far off places. I love the creative process. Because I write fantasy, sci fi and everything in between, I get to do a lot of creating when I write. Worlds. Customs. Even foods. 🙂 I also adore that process of being able to develop a complex and unexpected character. Watching them shape and grow the more I write. That moment when you hit your stride and the words don’t feel forced or uncertain. Where they just flow. Those are the moments I live for as a writer.

What is your least favorite part?
Rewriting. I find when I have to fill plot holes and rewrite huge chunks that its mentally and physically exhausting . You’re not creating so much as doing patchwork. That’s probably my least favorite part.

I think a lot of us authors can relate to that! Can you tell us about your latest/upcoming book?|
My upcoming release is called The Girl Who Could See. Its about… A girl who is crazy. Her imaginary friend who claims he’s not imaginary. And the monster threatening both their worlds. In order to survive, Fern will have to confront her own insanity—and believe in the impossible 🙂

From where did the inspiration for this book come?
The idea for this one was very on the nose J I literally had two sentences that kept playing through my head, forcing me to tell the story that was woven between them:

They say every child had an imaginary friend.
Mine never left.

What was the last/current book you’ve read?
I just finished The Awakening, book two in Katie Ganshert’s The Gifting series. It was such a good read! ❤

Who are some of your favorite authors and why?
Oh, so many! I love, love, love Lewis. For so many reasons. His creativity. The way he told stories. The way he wove spiritual themes throughout. The way he combined various influences.

I also have the great pleasure of knowing quite a few amazing writers. One of them, Joanne Bischof (author of historical fiction. If you haven’t read The Lady and the Lionheart yet—go read it. SO. GOOD. You have no idea) is a very close friend and mentor of mine. I don’t write the same genre she does, but in some ways I think that’s why she sharpens my writing so much. She has a unique perspective on it. Plus she’s just brilliant 🙂

Yes! Joanne is wonderful! What’s one piece of advice you’d like to give other writers?
Write…write…write. The more you write, the better you will get. Write foremost for yourself because you love it, then as your craft grows, start writing so others will enjoy it too. So that the story you have to tell can impact others.  And—its okay to fall in love with your characters. Get to know them so well that you are dying to write their story every day. 🙂

And just for fun… What’s your favorite food/movie/vacation spot/song?
Eeesh, not sure, but I’m always a sucker for a good Marvel movie. Spider Man: Homecoming looks amazing 🙂

The Girl Who Could See: A Novella 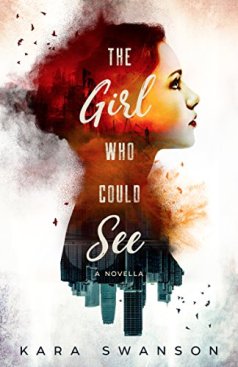 All her life Fern has been told she is blind to reality—but, what if she is the only one who can truly see?

Fern Johnson is crazy. At least, that’s what the doctors have claimed since her childhood. Now nineteen, and one step away from a psych ward, Fern struggles to survive in bustling Los Angeles. Desperate to appear normal, she represses the young man flickering at the edge of her awareness—a blond warrior only she can see.

Tristan was Fern’s childhood imaginary hero, saving her from monsters under her bed and outside her walls. As she grew up and his secret world continued to bleed into hers, however, it only caused catastrophe. But, when the city is rocked by the unexplainable, Fern is forced to consider the possibility that this young man is not a hallucination after all—and that the creature who decimated his world may be coming for hers.

Pre-Order The Girl Who Could See here. 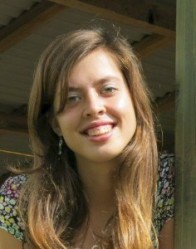 As the daughter of missionaries, Kara Swanson spent sixteen years of her young life in the jungles of Papua New Guinea. Able to relate with characters dropped suddenly into a unique new world, she quickly fell in love with the speculative genre and was soon penning stories herself.

At seventeen, she independently published a fantasy novel, Pearl of Merlydia, and has since gone on to have several articles and short stories published. Kara’s upcoming release, a novella titled The Girl Who Could See, releases in June. Kara received the Mount Hermon Most Promising Teen Writer Award in 2015. When she’s not creating new stories and placing characters in peril, she’s probably binge-watching Marvel movies, playing with her huskies, reading till two in the morning or experimenting with a dairy-free mocha Frappuccino (skills, I’m telling you).

GET YOUR FREE SAMPLE CHAPTER HERE!